How to perform Ganesh Chaturthi Puja... 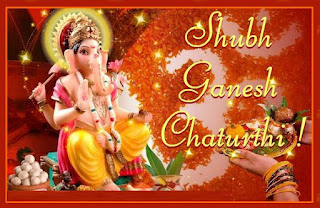 Traditional stories tell that Lord Ganesha was created by goddess Parvati, consort of Lord Shiva. Parvati created Ganesha out of sandalwood paste that she used for her bath and breathed life into the figure. She then set him to stand guard at her door while she bathed. Lord Shiva returned and, as Ganesha didn't know him, he didn't allow him to enter. Lord Shiva became enraged, severed the head of the child and entered his house. After realizing that he had beheaded his own son, Lord Shiva fixed the head of an elephant in place of Ganesha's head. In this way, Lord Ganesha came to be depicted as the elephant-headed God.

The festival is observed in the Hindu calendar month of Bhaadrapada, starting on the shukla chaturthi (fourth day of the waxing moon). The date usually falls between 19 August and 20 September. The festival lasts for 10 or 12 days, ending on Anant Chaturdashi. This festival is observed in the lunar month of bhadrapada shukla paksha chathurthi madhyahana vyapini purvaviddha. If Chaturthi prevails on both days, the first day should be observed. Even if chaturthi prevails for the complete duration of madhyahana on the second day, if it prevails on the previous day's madhyahana period even for one ghatika (24 minutes), the previous day should be observed

How to perform Ganesh Chaturthi Puja

Ganesh Chaturthi or Vinayaka Chaturthi is one of the most colorful and widely celebrated festivals in India. Large number of people observe Ganesha Chaturthi poojas at home. Here is an explanation on how to perform Ganesha puja at home as mentioned in Hindu scriptures.

Ganesha puja on the Chaturthi day is usually performed at noon but nowadays people perform it when all the family members are present. 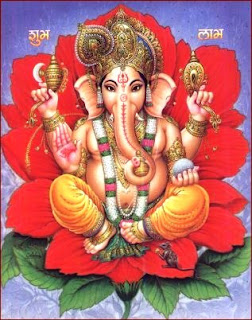 We invoke You, O Ganapati of the ganas (Lord Shiva attendants), Who are Brahmana-spati of the brahmas (prayers), the wisest among the wise, Who abound in treasure beyond all measure, the most brilliant one. Do listen to our prayers, come with Your blessings and assurances of protection into our home, and be seated.

Sit down among the worshippers, O Ganapati, the best sage among the sages. Without You nothing can be done here or far. Accept with honor, O wealthy One, our great and variegated hymns of praise.

Now Ganesha is installed in the idol and one can perform arati and light the lamps. Some people perform the shhodashopachara, which are 16 forms of paying tribute to Ganesha.
Offer 21 blades of Druva Grass.
Offer 21 modakas
Offer red flowers
Apply a tilak using red Sandalwood paste.
Break the coconut or just keep it along with the idol. You can also keep fried grains. (The food of the rat – the vehicle of Ganesha).
You can also recite the 108 salutations dedicated to Lord Ganesha or read the Ganesha Upanishad or just simply pray.