Prema Sai Baba: The next Avatar of Sai Baba 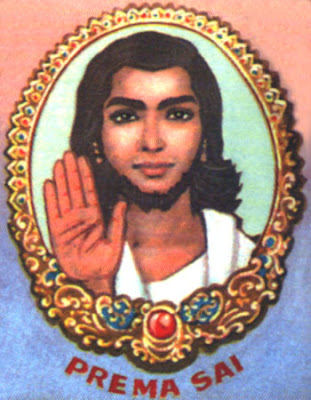 Sathya Sai Baba says that He is the second of a triple incarnation. The first was Shirdi Sai Baba and the third will be Prema Sai Baba. Below, we give the information that is known about Prema Sai Baba, with references to the sources.

The first mention of Prema Sai by Sathya Sai Baba appears to be in the discourse Shiva Shakthi, 6 July 1963, In a conversation between Shiva, Shakthi, and Bharadwaja after Bharadwaja performed a ritual, Shiva said that they would take human form and be born in the Bharadwaja lineage, thrice: Shiva alone as Shirdi Sai Baba, Shiva and Shakthi together at Puttaparthy as Sathya Sai Baba, and Shakthi alone as Prema Sai, later.

We have heard often that Prema Sai will be born eight years after the passing of Sathya Sai Baba, which will take place when Sathya Sai Baba is 96. We do not have a reference for this information. In "The Sai Trinity", by Dr. S.P. Ruhela (Taring paperbacks, Vikas Pubishing House Pvt Ltd, New Delhi, 1997), the author states that Sathya Sai Baba has been disclosing small amounts of information to close devotees from time to time and states that Sai Baba has predicted that Prema Sai will be born in Karnataka about 8 years after He leaves this body.

Howard Murphet, in his book Sai Baba: Invitation to Glory (Chapter 4), says that Finally, Sathya Sai states, there will be Prema Sai who, one year after the passing of the Sathya Sai form, will be born in Karnataka (the old Mysore State), at a place between Bangalore and the city of Mysore. On page 16 of the book Living Divinity author Shakuntala Balu writes, Sri Sathya Sai Baba has said that there will be one more Sai Avatara called Prema Sai.

The third Sai will be born in Gunaparthi, a village in the Mandya district of Karnataka. Thus, Sri Sathya Sai Baba refers not only to his past, but also to the future form he will assume as Prema Sai. In Sathya Sai Baba, The Embodiment of Love, by Peggy Mason and Ron Laing, the authors write about a discussion they had about Prema Sai. We wondered if the next descent as Prema Sai, to come very quickly after the present form is vacated at the age of ninety six, would be female. Baba replied, "No, male, in Mysore -- Karnataka." (Since 1972, the state of Mysore is called Karnataka.) In Glimpses of the Divine: Working with the Teachings of Sai Baba" (1993), author Birgitte Rodriguez writes In a more private talk to students in recent years, Baba told them that the father of His next incarnation, as Prema Sai, had been born in the southern Indian state of Karnataka.

He also said that the body of Prema Sai was in the process of being formed. The missions of the triple incarnations In Spirit and the Mind, by Sam Sandweiss, the author recounts an extended interview given by Sathya Sai Baba to the Senior Editor, Mr. R.K. Karanjia, of Blitz new magazine in September 1976. Question: Why had this task to be divided into three separate incarnations of the Shirdi, Sathya, and Prema Baba? Baba: They are not separate.

I have already mentioned the complete oneness of the three in the final objective of the mission. ... Their tasks and powers requisite to them differ according to the time, the situation, and the environment. But they belong to, and derive from, the same divine body (dharma swarup). ... The previous Avatar, Shirdi Baba, laid the base for secular integration and gave mankind the message of duty as work.

The mission of the present Avatar is to make everybody realize that the same God or divinity resides in everyone. People should respect, love, and help each other irrespective of color or creed. Thus, all work can become a way of worship. Finally, Prema Sai, the third Avathar, will promote the evnagel news that not only does God reside in everybody, but everybody is God. That will be the final wisdom that will enable every man and woman to go to God.

The three Avathars carry the triple message of work, worship, and wisdom. Hislop's changing ring In John Hislop's My Baba and I, page 55-56, Hislop writes about Swami materializing a ring for Hislop with Prema Sai on it. The image of Prema Sai on the ring actually changed its position over the years. Hislop writes, The stone was a cameo of Prema Sai, the loving Lord of Creation, destined to appear on Earth a few years after the death of the Sathya Sai Body. It was a brownish stone, highly glazed, sculptured in profile, the bridge and length of the nose visible with a suggestion of the arch of the left eye. It was a noble head with shoulder-length hair, moustache, and beard; the head resting on, or emerging from, a lotus flower.

His countenance was tranquil, peaceful, majestic. Baba said, "He is only now in the process of birth, so I cannot show more of him. This is the first time he is shown to the world." ... Wherever I go, devotees ask to see the ring. ... In a year or so, those devotees who had seen the ring sometime earlier said something surprising on seeing it again. They said, "It is turning. The whole nose can be seen now.

" My reply was always, in truth, that I could see no change. But they said, "You see it every day and do not notice." ... One day, [in 1980], at a devotee meeting, I was showing the ring, and I looked at it carefully. It struck me, "It is different! It is changing!. Now the entire nose is there and visible, whereas at first the entire nose was not visible -- or better to say the nose merged into the edge of the stone and did not appear to be fully visible. But now there is a space between the nose and the edge of the stone. Moreover, a portion of the left eye can be seen and also a portion of the left cheek.